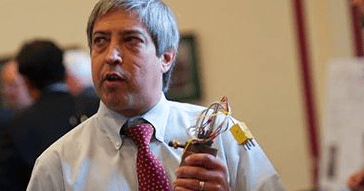 America is taking a leadership role in researching and developing a new energy technology known as Low Energy Nuclear Reactions (LENR), which is essential to our ultra-clean, low-cost renewable energy future. Unlike atomic fission, LENR holds the promise of generating tremendous low-cost heat energy, without making any by-product wastes of any kind (zero radioactive waste outputs or carbon gases).

Earlier this month, the U.S. Congress’s Armed Services Committee took an important step towards realizing a leadership role by calling for a briefing on the military utility of recent advancements in LENR energy technologies by U.S. scientists and entrepreneurs. The full language (see p.87/123) is available on the House Committee’s website.

The call for a new Briefing Report to examine the current state and scope of research activities in developing (LENR) for its FY2017 National Defense Authorization Act will help to open eyes on what, until recently, has been a stigmatized and poorly understood energy phenomena. The Briefing Report should provide a forum for the growing community of U.S. companies including those in the aerospace, automotive and energy technology industries to share recent positive developments in LENR. And it marks a promising convergence of our nation’s national security imperatives with LENR’s potential to disrupt and revolutionize energy production.

The nascent LENR community faces a basic problem: LENR research has no presence in our leading academic and institutional research programs. Successfully launching an innovative and entrepreneurial industry in low-energy nuclear reactions, however, will require more than a new Briefing Report for Congress. It will take courageous leadership from the U.S. Department of Energy and the Department of Defense to rethink how they can support research and development activities for LENR.

Even if our best scientists and entrepreneurs were able to obtain the support to operate under existing academic rules, they would still need access to advanced facilities to test their LENR technologies because currently U.S. national laboratories refuse to deal with LENR startups and they have been discouraged from investigating low-energy nuclear reactions or working with the burgeoning LENR community.

With Japan, Italy, Russia, China, Israel, and India now devoting significant resources to research and development of LENR technologies, it is time to act to ensure our technology readiness. Our entrepreneurs and scientists working on new LENR designs should be supported with access to U.S. national laboratories and leading academic institutions to help the U.S. become the leader in the development and realization of LENR technologies. Taking such a step means supporting the emergence of an innovative U.S. industry capable of developing LENR to produce a new generation of low-cost, zero-carbon renewable energy products or devices. It is also a necessary next step in our efforts to cut America’s carbon emissions and avert a pending climate collapse.

According to the latest EIA forecasts, natural gas surpassed coal in 2015 to become our largest source of power generation. Unless there’s a substantial carbon tax or dramatic price increases, we’re told to expect natural gas to become our dominant source of power generation in the coming decades and beyond. In California, the share for natural gas has grown from less than one-third to greater than two-thirds of power production sources and shows no sign is slowing any time soon. This will continue to emit large volumes of carbon gases and related pollution.

With new nuclear reactors under construction proving to be complicated and costly to build, the hope has been to turn to renewables for power generation, however, there are no longer any unspoiled rivers left to damn. If we’re thinking we can cut emissions from power production to near-zero with intermittent renewable sources like wind and solar, then we are going to need between 45 and 75 square miles of solar PV capacity or between 260 and 360 square miles of wind turbines to replace every single 1,000-MW natural gas, coal or nuclear energy plant.

In the labs of our leading LENR entrepreneurs and scientists, experimental devices utilizing LENR are demonstrating the promise of providing an inexpensive and inexhaustible new power source. This source doesn’t pollute our skies, require costly and dangerous refueling, elaborate safety systems and containment structures, or require new lands that would be better left unspoiled for future generations.

The House Armed Services Committee’s call for a Briefing Report on LENR technologies is an important first step. The authors of the Report should consider all of the ways we can improve how we support our scientists and entrepreneurs.

Private investors and small startups don’t have decades to continue making incremental progress towards producing LENR products. Opening up our national laboratories to work with LENR and existing LENR companies and encouraging our leading academic institutions to investigate the potential for LENR technologies should be the next step.

It’s time for American technological innovation leadership to include research and development programs in low energy nuclear reactions. Samuel Clemens once wrote: “It ain’t what you don’t know that gets you into trouble. It’s what you know for sure that just ain’t so. “

We are on the cusp of a new era of cheap, abundant and reliable power from LENR technologies, and establishing a leadership role for the U.S. is an imperative we can all support.